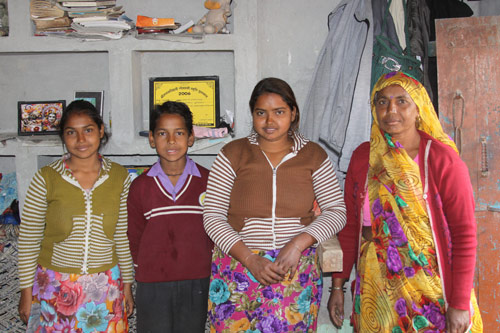 It is Friday again, the day to introduce you to another child of our school: thirteen-year-old Akhil from the third class of our school.

Akhil is the youngest of four children and the second son of the family. His elder brother went to school until the tenth grade and when he failed that year, he simply stopped going to school. He is a drop-out, a boy who has not learned much in school and not any profession. That’s what he is doing a the moment: nothing at all.

Akhil’s eldest sister however is the complete opposite. She is now in eleventh grade, likes learning, thinks she will pass the year with good marks and additionally sews clothes on a sewing machine in the family’s home. She sews whatever the family needs and she also takes orders from women in the neighbourhood, earning some extra money to support her family.

This support is very welcome, as the children’s father only earns about 80 US-Dollar in a month. This is not what he expected to be earning when he was young and went to university for his bachelor degree in education. Yes, he is an educated man but was not able to find a steady position in any school that would pay him enough to support his family financially. This is how he is now watching the store for a local charity organization.

As a bachelor of education and seeing that he spends money on both of his daughters’ education, one might think that this man actually knows about the value of education. This thought changes however when you get to know about his younger daughter’s school records. She was learning at our school for several years when one year she didn’t come back. On inquiry with the parents, we were told that she had changed to another school. She had left our school after 2nd grade and when we now asked her, she told us she was now in 7th class at her new school! Her father had made a deal with a teacher of another school who had then issued the girl a certificate of passing the 5th grade – without ever having been to that school. That’s how she is now in the 7th grade without having ever studied in grades 3 to 5.

Akhil however stayed at our school and keeps on learning there. The teachers tell that he is an average student when you look at his marks and he tries and does good effort in class. They also tell that whenever there is any talk that is not related to the current class going on, Akhil is the first to say something. He is very lively, talks a lot and thoroughly enjoys going to school.

We are helping this family by educating Akhil completely for free. If you would like to help us supporting children like him, you can do that by sponsoring a child or sponsoring the food for a day.