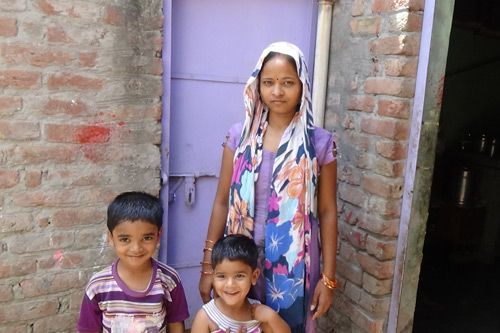 Today I would like to introduce you to Dhruv, a boy of our school who started learning with us in July. In that time we were at first unsure whether he is not too small for our school – but soon noticed that he is only shy at first and is quite clever picking up new information!

Dhruv was with his five years among the smallest children of our newly admitted students. His father being a hairdresser in a poor area of Vrindavan, his parents had heard of our school from the neighbours and their children. Dhruv’s family owns a small house in the second row from the main road. The entrance is a door leading into a rather narrow walkway that then opens into a courtyard. It has three rooms, one of which is used for sleeping and living, one as a kitchen and one for storage.

This means that Dhruv’s parents share that one living room with their three children as well as Dhruv’s grandmother. They have three beds, one of which is just a metal frame with cloth stretched in between. When we ask Dhruv who sleeps where, he tells that his father usually sleeps on the floor – so that the women and kids sleep on the beds. Dhruv is the oldest of three, with two younger sisters.

Dhruv’s father is a hairdresser, renting a shop two houses further and paying the rent for it from his income. As there are several more men of the same profession just next door, the income can vary greatly – and often, the result is that they have not more than the essentials for dinner. ‘We eat bread, lentils and pray that it gets better’, Dhruv’s grandmother tells. Of course, vegetables and fruit would be important for the kids, too, but that is something that is reserved for times when business runs well.

That’s how it is not only important for the family that we provide Dhruv quality education for no money at all. No, he also gets a warm lunch at our school every day, making sure that at least one of three kids has had something warm and nourishing in the stomach!

Dhruv is just about to start his exams for the end of the year and is obviously excited due to that. We are happy that we have several years ahead of us supporting this boy and his family!

If you feel like helping us with this effort, you can sponsor a child or the food for a day. We already thank you for your support!