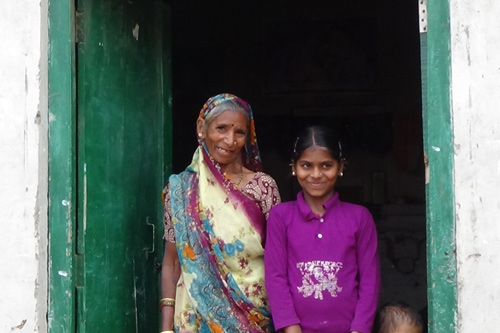 Today I would like to introduce you to the oldest girl of our smallest class, the LKG. Her name is Beena and she is ten years old. When we went to her home last week, we knew exactly we wouldn’t meet her parents – let me tell you why.

At the time of admission last year, Beena came with her aunt and her cousins. Her aunt admitted her own children and then asked Ramona to take Beena as well. Ramona obviously asked her to please send Beena’s parents. That’s when she got to know that Beena was living neither with her aunt nor with her father. She is living with her grandparents!

Beena’s mother died in childbed. Her grandmother tried to explain us that after the baby had been born, the placenta did not come out. It was a home birth and the family had hired two nurses for the birth – but the situation got out of control and until the nurse had the idea to finally call a doctor, the new mother was already closer to death than life. They couldn’t save her – and there was Beena, a healthy baby girl, not knowing that she had just lost her mother.

Obviously, in the time of mourning, there were many people around who helped get the girl through the first months. After that, however, help became less and less and when Beena’s father went to work, he simply left her with his own mother. She asked in the family whether there was a younger woman who would raise the girl with her but nobody was interested in taking the burden.

It was even worse when Beena’s father remarried: he now has a new wife and children but none of them has any bigger interest in Beena than saying hello and goodnight. That’s how Beena was raised by her grandmother and calls her ‘Mum’, too. Her grandfather is the one providing for her. They live in a room at the front of the property and Beena’s father with his new wife and children behind that in another room.

Obviously, money is always tight. Beena’s father takes care of his own family by running a small shop while her grandfather goes to work as a security guard at a cow house to provide for his wife and granddaughter.

Now Beena is at our school and she enjoys it there. She learns quickly and helps her younger classmates.

You can help us helping children like Beena! Sponsor a Child or the Food for a Day for the children of our school!

Accidents, Weddings, Death and other Reasons why Indians cannot keep their Word – 24 Jan 16