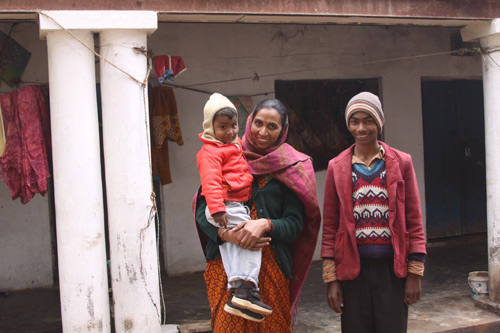 Today I will introduce you to a boy of our school called Sujeet. He is twelve years old and thus one of the oldest students in his class, the first class of our school. He has two brothers, one older with 15 years and one younger, only three years old.

Sujeet lives in the same housing complex as Krishna and Shankar. This is the best place for the children, says the mother, because both she and her husband go to work every day and if Sujeet or his elder brother come home, they don’t play out on the open road but just there with their neighbours, where it is safe.

The father is a rickshaw-driver but when we talked with his wife, she told us that he hardly earns any money. She explained that he has no luck in getting customers – whether this is the case or maybe her husband does not show willingness to work, we cannot tell. She reports that when money gets tight, he takes the job as a security guard for a month or two.

Sujeet’s mother herself works in a school nearby where she prepares food for the school children. It is an expensive private school and she was lucky to get the job – as her oldest son was then allowed to study there for free. Her salary however, approximately 30 US-Dollar, would not be enough to pay the rent of nearly 20 US-Dollar, additionally food and clothes and then also the education of her next son.

This is the reason why Sujeet did not go to school until he was more than nine years old. That’s when his mother got to know about our charity school and approached us for teaching her boy. Of course we accepted him and that’s how Sujeet is learning with us now. Due to his age he was able to pick up fast and learnt reading, writing and basic calculation in our pre-school classes.

Teachers tell that he is a jolly boy and likes to play with the older boys but that they are able to give him the responsibility of looking after the smaller children of his class when teachers are not present in the room.

He himself tells us with a grin how much he likes school – but maybe not more than playing cricket with his friends and neighbours at home!

If you would like to support children like Sujeet, you can do that with a child sponsorship or by sponsoring the food for a day!