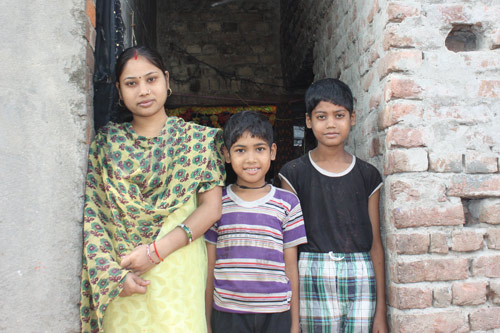 Today I would like to introduce you to two boys who have been at our school for the past two years. Their names are Rahul and Gopal and they are 12 and 10 years old.

Their family is not a conventional one. When you reach their home, you get the impression that it could be because you can meet their mother who is wearing the traditional Hindu signs of a married woman. The first thought is that the boys’ father is probably at work. Most probably he is – but after work, he won’t return to their home but his own parents’ home in Mathura, about 15 kilometers away.

Only three people live in the two rooms which Rahul’s mother rents: she herself and her two boys. She pays the rent, she buys food and she runs the house. How come? Let me tell you this unusual story of a family.

Rahul and Gopal’s mother got married when she was only 13 years old. Her father had already expired and so it was her mother’s responsibility to marry her. She sold the family house to be able to afford the dowry and pay for the wedding. One year later, Rahul was born. Two further years later, when the mother was 16 years old, Gopal was born.

Only two further years later, the two boys and the mother moved out, back to the boys’ grandmother. With 18 years, this young woman was married, had two children and had moved out again already.

In those years which she had spent with her in-laws, in the house of her husband, she had had a lot of problems with the people around her, her husband’s parents, his brother and his brother’s wife. She quit. The home but not the marriage.

Soon, she started working on her own, making clothes of deities to support the income of her mother and to raise her boys. The father didn’t want to pay any money for them – he thought she would come back. She did not. Instead, she managed to rent a place of her own, to pay for the rent and all expenses you just have when you have children. She earns about 50 US-Dollar at her job, makes extra clothing at home to sell it and often asks her sons to help as well, making up to 10 Dollars extra per month. Nearly 25 US-Dollar go for rent for the two rooms they have. But she is proud that she can do it on her own!

When we ask about her husband however, she also insists that she is properly married. “We are not separate, he comes by every week or two weeks! Everything is alright!” Keeping up the appearance of a marriage. Just for the people around who all actually know what is going on!

At least however, she doesn’t need to worry about the education of her sons anymore. They are in the 2nd and 3rd class of our school now and have lots of friends! They get food and education for free – a big support for their mother now and it will be an even bigger help in the future!

You can help families like this one by sponsoring a child or the food for a day for our children!