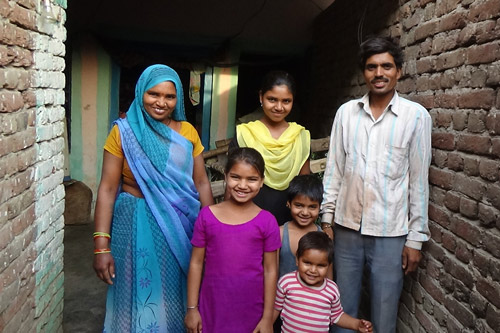 Today I will introduce you to one of those children who will be in our school for the first time in the next school year: Hari Om. Arriving at his home, we realize that the members of this family are no strangers to us! Hari Om will definitely feel at home at our school – three of his sisters are currently learning with us and his oldest sister has already finished her primary education with us!

It is one of those families that would not have had as many children had a few chromosomes been different: they had four girls before they finally had the two sons they always wanted to have! What they did not think about, just as so many other families with illiterate or less educated parents, is that they still need to raise those four girls! They don’t have the funds to send them to school – how are they going to pay for their weddings?

It is quite a predicament which the family got itself into, especially as the father’s health is not good at all. He has a kind of a permanent cough which gets better sometimes and at other times gets so bad that he cannot even leave bed in the morning! After having been to their home the last time, I already told you that doctors had denied treatment, saying that it would not be possible to do anything about it. A childhood injury which is impossible to treat today, at least that’s what the family tells us.

They have their buffalo cows that give milk when they had calves but at the same time eat a whole lot, which narrows down the profit. That’s how they started opening on of their rooms towards the street, selling sweets, snacks, pens and similar small things from there to people walking by. As the father goes out to search work, the mother sells there and, whenever she is busy for example with the buffalo cows, the girls take care of the shop.

They are very poor, no doubt about that, but as I told you already last time when I wrote about them: they are among the jolliest people, enjoying life, laughing and having fun whenever you meet them!

You can support family’s like Hari Om’s with a child sponsorship or by donating the food for a day for the children of our school!