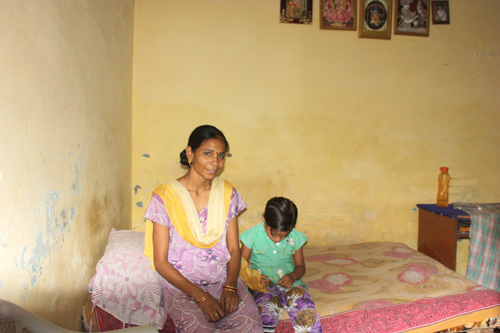 Today I would like to introduce you to a girl who has recently spent a lot of time at the Ashram: eight-year-old Vaishnavi.

When we came to Vaishnavi’s home in April, we got to know that this is probably one of the shyest girls we have ever met! In spite of several attempts to involve her in conversation, she did not share one single word with us.

Her mother Poonam told us that she had three children, a boy of eleven years, a girl of ten years and Vaishnavi. The two elder children don’t live with her however. They are with her mother in a town which is about one hour from Vrindavan. It has been three years that they have been living and going to school there. The reason? The financial problems of their father.

Vaishnavi’s father is electrician. That’s what he was doing when he got married but then he had the idea to start something different: he bought paintings of Hindu gods and embellished them with glittery stones or cloth, put them into a nice frame and tried to sell them for a higher price. This did not bring them enough money to even pay their rent though! So they moved from a rented flat in the center of town to one at the border of town.

It was in that time that Poonam took the most difficult decision of her life until this point: she sent her two eldest children to her mother for them to live and learn there. She knew they could not afford paying the school fees for them anymore but she wanted them to go and learn. It has been three years that she only saw them in the holidays or when she went for a visit because she missed them so much.

Vaishnavi’s father finally decided to go back to working as an electrician. Like this, too, he doesn’t earn much more and he still has to go out each day and try to find work, but at least it gives a bit more. Enough to pay the rent for those two rooms and bathroom they are living in.

When we asked further however, it got very clear that Poonam is not really happy: she told us that each piece of furniture in their home, from the bed to the table to the TV, are part of her dowry. She got all of these for her wedding, from her father who was a government teacher and had saved to give an equal amount of money to each of his four daughters. At the time of the wedding, he would probably not thought that nearly fifteen years later, his daughter would still not have had the money to buy another bed!

With a frustrated sigh, Poonam tells that she had asked for work in a lot of places but could not find any, partly because she had Vaishnavi, who until then had not been to school. Only a few days after having visited them, we called her with an offer: would you like to work at the Ashram?

And when she is playing, you won’t believe how much this girl can talk!

If you would like to help children like Vaishnavi and their families, you can support us by sponsoring a child or the food for a day for our children! Thank you!