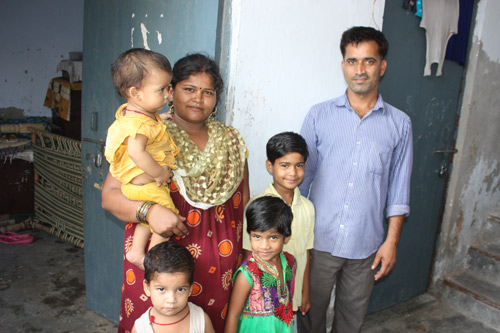 I would like to introduce you to one of the bigger girls among our newly admitted children today. Her name is Gauri and she is eight years old.

Gauri came to Vrindavan with her parents when she was three years old. They had lived in the village of her grandparents before, which is about an hour’s drive from Vrindavan. Her grandfather is mentally not healthy and that has caused a lot of trouble for the family: he sold his land, big fields of grains, for a cheap price and thus left his sons with no other option than to work on other people’s fields, do daily labour or find any job that would bring them money.

Gauri’s father decided to become a driver. He drives trucks and when necessary also other cars. He doesn’t work for a certain company though and thus always has to be active to find another job. Sometimes he doesn’t find anything for months – like when we went to meet them at their home. His wife told that he had been sitting at home without work for the past two months! Obviously this means for the family that there is no income and they have to use up their meager savings of previous months.

It was a similar situation that had made Gauri’s previous school kick her out. It was a cheap school but when Gauri’s father was ill for five months in the last year and couldn’t earn anything, they could not afford even the small school fee. They would not let Gauri back into class if her mother couldn’t pay her fees. That’s how for nearly a year Gauri had not gone to school.

The mother had tried to admit her as well as her 6-year-old sister at another charity school. There however, they didn’t have enough places left and told them they would only take one child. That’s how Gauri’s younger sister is going to that school. Gauri, in the meantime, was at home, helping her mother taking care of her 4-year-old and 1-year-old baby brothers.

Depending on the amount of work he gets, Gauri’s father earns approximately 60 to 80 US-Dollars a month – but sometimes also nothing at all. This was what made the family eligible for one of the government’s charity flats built in a big housing complex in Vrindavan. The family was one of the selected ones for one flat with two rooms and a bathroom. They can live there, it is theirs, completely free of cost.

Obviously this is already a great support, as they don’t need to pay rent or pay back any loan. Gauri’s mother tried to get some extra income by running a small shop, practically a wooden box, at the side of the road. They ran into financial difficulties however and could not continue purchasing merchandise – so one day there was nothing to sell anymore and she gave up. She was very sad that she could not even earn enough money to send her eldest daughter to school.

Now they don’t need to worry about this anymore! Gauri now comes to our school. She has started learning and as one of the older kids of her class, also enjoys helping the younger ones!

You can help children like Gauri! Sponsor a child or the food for a day!