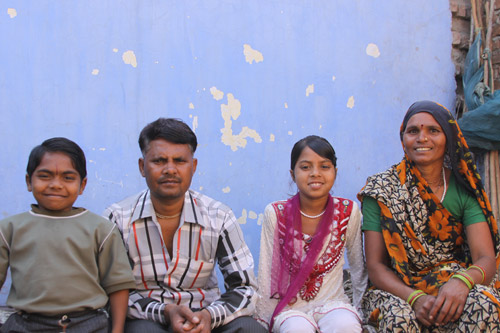 Today I would like to introduce you to a boy and a girl, Arjun and Khushboo. When you look at Khushboo, you will see a girl like every other at our school. When you take just one look at Arjun though, you will know right away that he is not like the boys of his class: the 14-year-old boy’s legs are deformed, his body smaller and he is thus about half the size of his classmates, and half the size of his 13-year-old sister.

Khushboo is the youngest of four children. Her eldest brother is 22 years old, the second-eldest 17 and then there are Arjun and she. Their father is a laborer who does whatever work he can find, earning approximately 4 US-Dollars a day.

The eldest son didn't want to go to school anymore after the 6th class and joined a religious theatre which then paid him nearly one Dollar a day and now, nearly ten years later, pays him the equivalent of one-and-a-half US-Dollars a day plus food. Together, father and son pay the school fees of the second son – but after that, there is not much money left for the youngest two! That's how they are at our school.

When Arjun came to our school three years ago, we asked his mother about the extreme X-shape of his legs. She told us that he had polio. In spite of the difficulties that this obviously gives him in walking, Arjun is a happy boy, playing and running around with his classmates and even doing yoga – and quite well!

It all started when he was about 3 years old. Arjun's feet started turning, twisting in the wrong direction and he had pain. The family massaged his feet and thought they saw positive effect but over time it clearly got worse. Someone told them it was polio and they believed it – but the boy had no other symptoms than the slow deformation of his legs and the pain that came with it. A few years later, they went to a free polio camp in town. The doctors there just looked at his legs – in x-shape already then – and explained that a surgery might or might not help. Being afraid of the pain this could cause, without a sure improvement, they decided against it.

That’s how time passed with the idea that Arjun had polio as a small child until we, after the visit to his home and getting to know that no doctor ever officially diagnosed the disease, went to a doctor with Arjun. A few blood tests and x-Rays showed that Arjun most probably suffered from a lack of important vitamins and minerals when he was a baby. This made it difficult for his bones to grow properly and they additionally became weak, causing several fractures on top. These were never treated and that’s how today, even with good nutrition, Arjun has this deformation and pain in his knees when walking longer distances. His upper body grows heavier while his weak legs have difficulties supporting his weight.

Local doctors have denied that there is any help for him at this stage. We have plans to take him to a bigger hospital to take advice there, what can be done to prove the future of this boy.

While his sister and class-mates have longtime outgrown him with their long legs, he has difficulties getting through the mud in front of his one-room home. At the same time however, he is fully active, even wrestling in playful fights with his friends.

Whatever will come for his future, we will be there to support him! If you would like to help us in this, you can simply make a donation – every support helps!