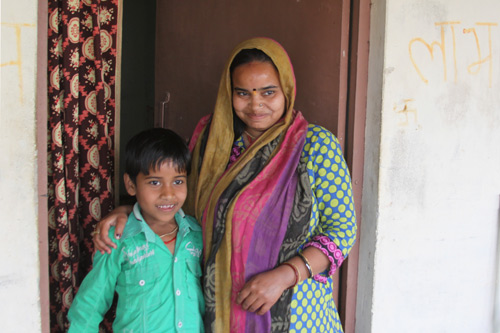 I already introduced you to Anjali, whose mother has left her and her father and whose aunt now mostly takes care of her. This aunt is also mother to Divyansh, thus Anjali’s cousin who is more like a brother to her.

Divyansh is eight years old and studies in the second class of our school. His father works in the same hotel as his brother, Anjali’s father does. He earns about 60 US-Dollar and gets a room to live in with his wife and son.

Originally from Faridabad, they have been in Vrindavan for the past five years. Two years ago, Divyansh’s mother complained of belly pain. At first, she thought it would soon go away but when it didn’t, they consulted a doctor. In Vrindavan, doctors were not sure what it was. They did some tests but although they were nearly too costly for the family, they did not bring any result. Divyansh’s mother decided to ask her sister for help who lives in Delhi, close to a government-run hospital in Delhi which provides free checkups for poor people. After a long waiting time, they finally got an appointment, made more tests and got to know that she had a liver problem – probably caused by the bad quality of their drinking water. They invested in a water filter and finally, the belly pain was gone!

Divyansh likes living in Vrindavan and as Anjali practically lives with them, he always has someone to play. He is a clever boy but at this time teachers tell he enjoys playing more than sitting down to learn. At home he plays with the other children of the house they are living in and at school he has several friends in his class.

We are sure that with some encouragement by our teachers, he will discover his joy in learning as well – and we know that this will be the base for a great future!

If you would like to support a child like Divyansh with free studies and food, you can sponsor a child or sponsor the food for a day for the children of our school!