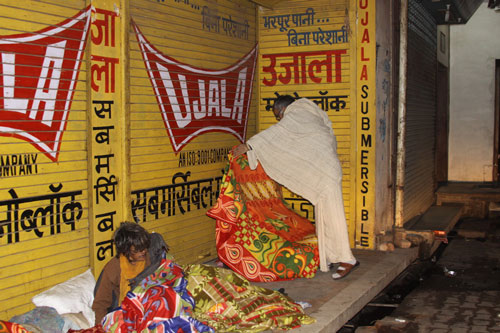 After my review of the year 2013 in two parts, yesterday and the day before yesterday, I of course want to tell you how I spent New Year’s Eve. It was not a party but there were a lot of people. I was out in the cold at midnight but not staring at a watch or the sky. There were no fireworks but warm feelings in the heart. I was not counting down seconds but blankets. Yes, we had gone out to distribute blankets to the homeless in Vrindavan.

It is really cold these days in our town. Like every year, it is the week around the change of years that is the coldest of all. The nights are anyway cold in wintertime with temperatures as low as one degree centigrade. On top of it, we don’t see much of the sun in these days, so even during daytime there is nothing to heat up the air and the floor – or the people sitting outside at temperatures of ten degrees and less. The rain a few days ago brought humidity into the air which makes everyone feel even colder and the cold winds don’t help either!

While we sit in the heated rooms of the Ashrams or around the fire in the entrance hall, there are many people who are not as fortunate as to have such shelter – not to speak of warm food or even heaters. There are many people whose home is the streets, who eat at the charitable Ashrams and temples that provide free meals and who sleep wherever they find a place to lay their heads down. They don’t have beds with warm blankets and cushions. They roll their few belongings to a small pack which they use as a cushion. They spread out a plastic sheet to lie upon. And they sleep, shivering even in their dreams.

It has become a tradition for us to do at least as much as it possible for us: we pack our car with blankets and go out in the night to cover the homeless with a little bit of warmth. We stop the car, take out the blankets and start putting them around these thankful people’s shoulders. Men, women, even children are there, meeting us with words and looks of gratitude. Many more are asleep and we simply cover them without waking them up. How it must feel for a person who has nothing but the clothes on his body to wake up in the morning with a warm blanket covering his body?

It was, once more, a great way to start the year. It makes you sad to see the situation they are living in but at the same time it warms your heart to be able to do at least a tiny bit. Doing something for others, in any way, really does make you happy.

A big thank you to everyone who contributed not only to this one but to our various charitable projects throughout the year. Child sponsors, food donors, regular supporters and people who once gave a smaller or bigger amount. You all were a part of making my and the Ashram family’s past year and years so wonderful. That’s why I want to share these moments with you, the hugs of the children, the smiles of the parents and the thanks of the homeless.