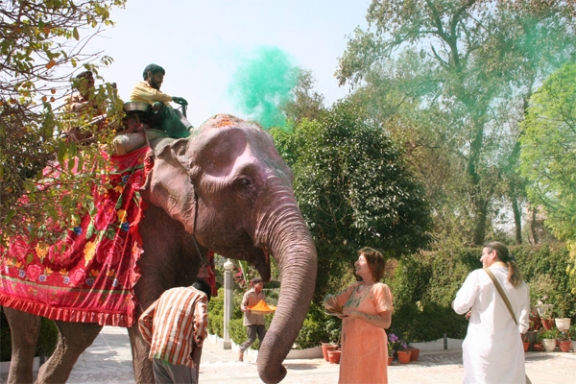 Holi is also a festival for welcoming spring. Here it is the time for harvesting and the crops are ready. Farmers get their harvest in and start selling it. Tonight they will celebrate by warming crops and having a feast. If you go out in Vrindavan tonight you will see many fires and in the main places of other cities there are very big fires, too. Everyone comes together, prepare their food at the fire and also distribute it to others.

I said already that everything here is connected with religion. In Hindu scriptures there is one story: Once there was an evil king who had a lot of ego and did not believe in God. He told everyone that he himself was God. His son however was a very great spiritual soul who had much love, devotion and compassion in his heart. The king wanted to kill his son and tried to do it in many different ways. He threw him down from high mountains, let elephants walk over him and tried poisoning him. But God saved his son’s life again and again. The king also had a sister who had the gift of protection from fire. She could not burn in fire. When all his tricks failed the king asked his sister to take his son in her lap and sit in fire so that the son would die and she wouldn’t be harmed. But the son’s love and the grace of God saved his life: his aunt who had this protection burnt and died but he survived.

The fires which are lit tonight show the burning of this aunt, symbolizing negativity. It is a symbol that love and compassion will always survive.

Tomorrow will be the peak of celebrations and everybody will get fully crazy with colours. And at two o‘clock everything will be over.