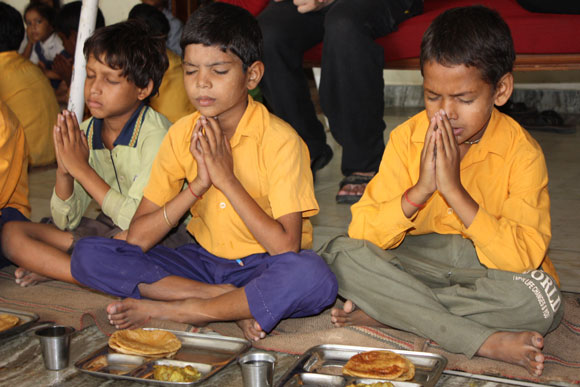 Yesterday I wrote about the reservation of jobs for low castes members and how it actually only increases the separation and gap in between the castes. Another such measurement which may have been meant well but which only increased the separation was this: the state government made the rule for its schools that priority for the job of the cook who prepares lunch for children will be given to people of the low caste that people consider as untouchable. If someone from that caste applied for the job of cooking, they would have more chances than other caste members.

It was however unimaginable for some parents that their children would have to eat food prepared by someone from this lowest caste. With the encouragement of some orthodox organization, a group of parents of a higher caste taught their children not to eat food in school. They even threatened not to send their children.

What impact does this have on these children? What do they learn? I do not want to talk about any specific party, I am just talking about the effect that these measurements have! They do not help at all, they make people aware of the castes. Even worse, this increases the hatred and prejudices that people have for other castes than their own.

People of lower castes have the idea that people of the upper castes are rich, arrogant and in some way better people and they envy them. Of course they develop bad feelings towards people of higher castes if they are treated by them with disrespect and even disgust!

People of upper castes sometimes do not get the jobs they are actually best qualified for. Sometimes they do not get into university because a quota had to be fulfilled and people with worse marks but from lower castes get seats! And of course, simply the word ‘lower caste’ already gives people these feeling all on its own. ‘We are better’ although there is no person higher or lower!

As I said, the measurements are taken in order to decrease discrimination but actually it is making everything worse. I don’t think that reservations like that provide any solution to the problem. People will still remember lower and higher castes. It actually increases hatred and separation into classes.

Let people finally forget about the old-fashioned caste system in the 21st century! We have to work so that everybody forgets about castes and nobody cares anymore which caste the other one once belonged to. I would suggest that we need to help people forget. But maybe politicians do not really want this.

I have read several times these days and fully agree on it that this was Gandhi’s life work, his aspiration and goal. Nowadays everybody talks of him as the father of the nation. Respect his life, his work and his idea that we are all the same! If you see someone is doing wrong, work against it by being a good example and showing what is right. It is important that we act and stand up for equality!