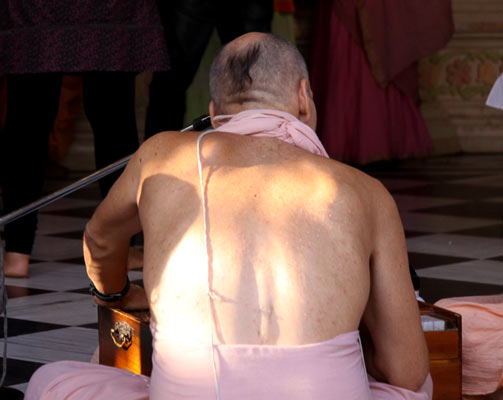 Yesterday I mentioned how Hinduism advocates the caste system in old traditions that then turn in some way ridiculous when Brahmans do several ceremonies a day in order to get more money for them. You see, the caste system is still very deep in this society. Where does the caste system come from though? It came into existence because of religion.

There we see again, religion divides people. Not only do different religions divide people but even this one religion divides people into different classes of people. They created the castes. Whoever was in charge in that time decided that he himself would be a higher caste person. They wrote scriptures according to that and divided the population into groups which had to serve them, the highest caste. This is how some people had to become untouchable so that they could do the dirty work for the others.

Nowadays you can see many people of other religions fascinated by Hinduism. They come from everywhere around the world to India and sometimes try to behave like Hindus and try to accept this religion. They don’t seem to realize that this caste system is part of the religion and comes from religion. So the same religion that you admire and try to imitate is dividing people into higher and lower persons.

It is sometimes really funny how westerners try to become Hindus. It is actually not possible. Hinduism defines its members by birth. If you are born a Hindu, you are a Hindu, you cannot convert to Hinduism. Here in Vrindavan we see many devotees of ISKCON who follow many Hindu traditions. They shave their heads and only keep only one strand of hair in the back of their heads, a Shikha or Chutiya, just as higher caste Hindus would do. They wear the Upanayana or Janeu, a thread hanging from their left shoulder which is also a sign of being a higher caste Hindu. If real Hindus see that, they think it funny and it seems like a joke to them. Even lower caste Hindus are not allowed to wear these items, how come you, a person who is not even a Hindu, wear these signs?

The founder of this sect told his members to wear that and according to him it is fine but many people wonder about this. How can that work? You are not a Hindu and cannot become one but you wear the sign of belonging to a higher caste. Higher caste Hindus are proud of wearing the Upanayana and keeping one strand of their hair longer than the rest of the hair. By imitating that, you actually support the caste system! Westerners, who in their developed countries usually loathe the idea of a caste system, imitate Hindu traditions and thus further support it.

We say the caste system is inhuman but millions of people still believe in it and this is why it exists. Even some people who follow the caste system say it is not good but they walk with the masses. The fact that millions of people follow something is no proof that this action is good. Many people followed Hitler, too, but you cannot say that he was right! There are many examples in the history of mankind where things are going wrong mainly because people support what the masses support. Think about what you do and if you can really approve of it.

In order to really get rid of the caste system, people need to realize that it is wrong and stop supporting it in so many ways. I am sure most ISKCON devotees don’t have an idea of the meaning of what they are doing and this is also why I am writing this. Should you follow ISKCON or any other sect or movement that tells you to behave like a Hindu, make an effort to understand everything you are asked to do and think about it whether you really can support the message behind that! Don’t support the caste system through your actions. It makes some people untouchable and it makes others stand higher than everyone else. Realize what you are doing and change it.

The religious Preacher Guru – an Interpreter of Scriptures – 27 Aug 12

An unhealthy Lifestyle in Front of the Computer – 29 Sep 13