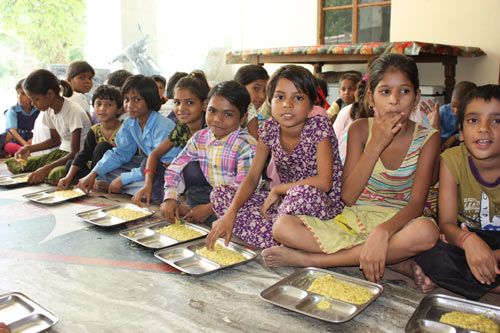 Caste Discrimination in India’s Schools – Equality in ours! – 17 Jul 12

This year, in the last school year, some of our children have finished the fifth grade and thus graduated from our school. We told their parents that we would like to support their education as long as they wish to keep on learning. Having finished their primary school, they have basic knowledge but in order to really help them find a good job one day, we have to support them further.

We contacted the government school where I also learned and asked how much the fees were for admitting these children. We were told that those of our children who are from lower castes would not have to pay fees. We would however have to pay the fees of those who are from higher castes.

That was a very strange statement and on the other hand it is something very common here. I wrote one time about the reservation system in India, a certain percentage of employees that have to be from lower castes. Colleges and universities, too, have to have a certain percentage of students from lower castes. These rules are made to prevent discrimination of people due to their caste. In reality however it makes the difference and separation of castes only more clear and present in people’s minds.

In our case for example it actually discriminates poor children from the upper caste. These children’s only fault is that they were born in a higher caste. We know that their family’s income is not high enough to afford education in a higher school. Nevertheless they would have to pay fees whereas children from lower castes, who might be more wealthy, would not need to pay school fees at all.

So there you have discrimination the other way around while in many school you can see that children of higher castes are treated better than children of lower castes. They are allowed to sit in the front and the teacher scolds them less. Lower caste children have to do more tasks around the school, including things nobody else wants to do, for example cleaning the toilets. In food time they are strictly separated because higher caste people don’t want their children’s food to be ‘contaminated’ by lower caste children.

We have created our school according to the concept of equality. All our children are equal, no matter which caste they are from. They sit next to each other in their benches, all learn together and, most important of all, eat all together. This is what the children learned in our school. Now coming to the next higher school they should learn that lower caste children don’t have to pay while higher caste children do.

Anyway, we decided that we will send these children to a private school and we will provide fees and expenses for books and more, even if it costs more, because the standard of education there is simply much better.