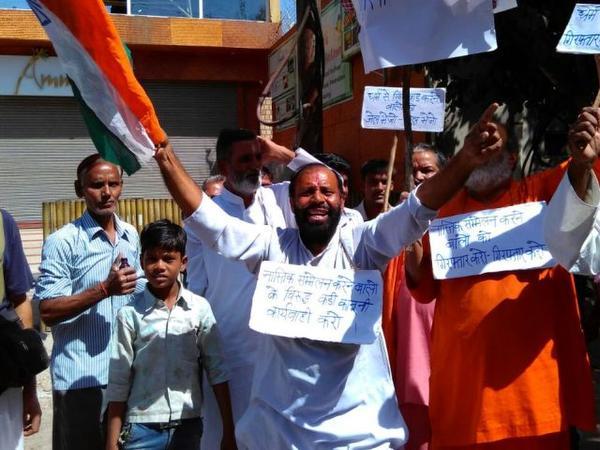 Thanks to religious Leaders, a cancelled Event made Atheism more popular! – 15 Oct 16

So yesterday was my 45th birthday and definitely a day I won’t forget. Not for my change of age however but for the events of this day.

As I already mentioned, we had planned an atheist meeting on 14th October. A similar meeting in the last year brought together a hundred like-minded people who enjoyed it a lot. When I put out the plan on social media in this year, thousands of people showed interest in coming and people started signing up right away. We had more than 500 confirmed guests – and information of many people coming along with them or coming without registration. So in this way we were expecting a crowd of up to 1000 people. We did our arrangements accordingly, preparing for feeding everyone and accommodating as many as possible.

People started coming already two days before the program to help as volunteers and many were on their way from thousands of kilometers away, by plane and train. Even though our event was to happen on our private premises, we took a legal permission from authorities, just as a precaution. Then we heard of a local event on which religious leaders and some goons with them were planning a protest and even an attack on our event. We were obviously not very happy about this but we thought that we didn’t have any problem with anybody, so why would someone have a problem with us peacefully meeting and discussing our thoughts? Why would believers disturb our calm dialogue if we don’t go to disturb their rituals and ceremonies? Even if they didn’t like us, they could do a peaceful demonstration here while we were inside our Ashram. But things didn’t turn out as we thought.

Yesterday morning, we were busy in the preparations of our event and enjoyed welcoming all those people who had come from all over India just for talking to people who think similarly. It was then that the drama started: a few of Vrindavan’s religious leaders prepared a stage at the other side of the road and began shouting slogans. As it is usual in India, a crowd soon began to form and people were obviously angry. We had prepared with extra security, closed and locked our gate and the shutter in front of our entrance doors.

Then, a bulldozer came and broke a signboard in front of our door as well as the ramp that was leading from the road up to our restaurant!

Those who were already inside watched the destruction in disbelief. We saw how the crowd gathered and shouted and finally started burning a puppet in front of our doorstep! A female reporter who tried to go out was pulled away from our gate by the crowd and was even hit! Also those of our guests who had not made it until our gate were held off by the angry mob!

Police officers were around to prevent bigger damage but unfortunately did not actively keep them away a lot. That’s how they managed to throw stones and break our new first-floor glass windows! They had petrol with them and wanted to set our home on fire. Due to some alert security guards, this could not happen.

Finally, the present police officers came to us and told us to cancel the event in order to be able to maintain law and order. In order to control the mob outside, they suggested a meeting with the leading religious personalities. In this, they tried to get me to promise them in written not only that we would cancel the event but that I would not call myself an atheist and that I would not write about such topics anymore. I replied that we would call off the event but that it was my fundamental right in this democracy to express my opinion and that I would do this further, too.

That’s how we cancelled our event. This news, too, spread like wildfire on social media. A lot of people who were on the way had to turn back. The official program was cancelled but with those who were already here, we decided to enjoy the evening with a birthday cake and dinner!

We wanted to discuss and talk – but these people came with violence! I was wondering: is this what religion wants to show itself? That’s why exactly so many people think it is not right to follow! With all this protest and the attack on this event as well as damage to our property, these people actually made our cancelled event so very popular! We would have peacefully had our program, had they not been there – but in this way, I have to really thank these religious people because the cancelled event spread like wildfire in social media and national and even international newspapers! Thousands more people got to know that an event for atheist or non-religious people was taking place in Vrindavan.

I was busy the whole afternoon with interviews – and below I am giving you the links for the most popular articles.

Of course many people were disappointed because the discussion that they had expected could not take place in the way that it was meant to. However, the message we wanted to give went out: religion does create issues we cannot ignore and atheism is a way that shows you how to get rid of many of these! I can assure those who could not come or who cancelled due to the events that we will meet again – there are already plans for getting together in an even bigger way, but this time in another place, for example in Delhi.

At this point, I want to thank my friends who were here and are still helping us through this time. Another thanks to those who are sending messages and birthday wishes and ask whether my family and I are safe. We are safe and in peace now, with police protection in front of our house. The restaurant is open again.

Of course, my family and I still have other issues now: we don’t need to calculate to see that we have a big financial loss. With the cancellation of the program, we had expenses for things that were not used, people who wanted to contribute could not come, the t-shirts we had printed and which a lot of people wanted to buy could not be sold. On top of it we have to replace windows, make a new ramp and get a new advertising board in front of our restaurant, too!

But life goes on and we are happy as long as we won't be bothered like this in front of our home!

I also want to use a few lines to thank everyone for your support of any kind, be it moral, emotional, mental or financial – it is very much appreciated! It was great to see how many friends we have, standing with us in this time.

And here are the news articles: