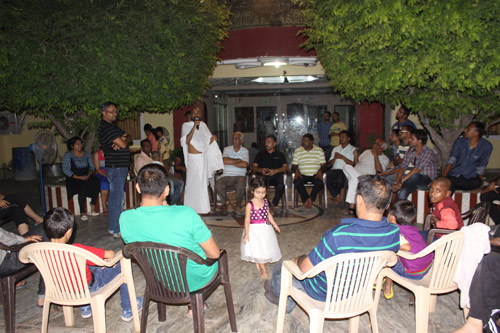 Obviously, after having been together with so many non-believers at a time the past weekend, there are a few things that strike you when talking to them. One of them is that they seem, in general, more ready to take responsibility and take decisions, than the average religious person I have met here. And this seems very logical to me!

If you just take yesterday’s example, an accident after which atheists try to help the injured person but are hindered by a religious man who is afraid. There are non-believers who are ready to decide and take the responsibility for their actions in order to provide help.

I believe that atheists can take such steps more easily because they have already gone down a more difficult path. They have already taken a decision to believe only what they really feel, not what their family or tradition tells them. Going away from what everybody is doing around you is not an easy task. You need a firm decision, willpower and the readiness to face whatever comes. So an atheist in India will usually be a person who tends to have all of the above. Only like this, he or she can be an atheist!

This is how atheists in India have already faced challenges and know that they are alright in spite of the difficulties from around them. They are ready to use their mind and find a solution to a problem.

Religious people tend to use another approach: they give it into the hands of god. With their trust that everything happens as god wishes it to be, they are often reluctant, even lethargic, when it comes to decision-taking. Very often, believers don’t try to solve a problem because they believe it is made by god. It should be there, it should be difficult – because god made it! They don’t get out of their normal routine because they rely on this imaginary force.

Plus, they are afraid. Religion is based on the fear of people. Without fear, it wouldn’t work. Nobody would believe in heaven if there wasn’t the fear of hell! Your sins, punishment for it, repentance and everything around this. Instruments for creating fear. And once you are used to this fear, it is part of your life at all times. When you see an accident, you get afraid. You won’t think of helping the other one but saving yourself from any problem that could come from it!

Religious people also ask their god for a decision at difficult points of their lives. They believe he helps them with it – but I have seen so many people just remaining indecisive, unable to go forward because they are still waiting for divine guidance which never comes!

Of course there are exceptions everywhere but this is a general tendency which I have noticed. Have you noticed that as well?