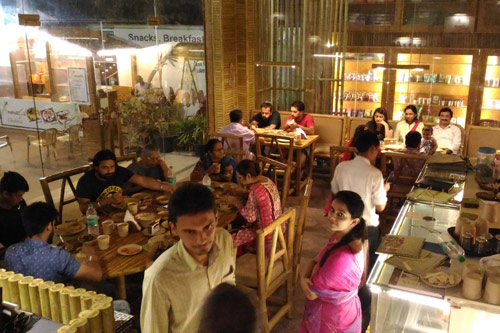 After having opened our restaurant, I have had several situations in talk with people in which people assumed I was religious. There could now be the question whether I correct this assumption or not. We are in Vrindavan, a lot of our guests have come here for pilgrimage and they are very clearly religious. I tell you that I have, nevertheless, told in nearly every situation that I am actually not religious at all. That I am an atheist.

We all wondered what kind of effect that would have on people. In Vrindavan this is definitely not a common occurrence – and people were surprised. I had thought some people might react in a negative way but here the surprise was on our side: I have not had even one person whose reaction was anything else but interested!

Really, most people express their surprise but are then interested in getting to know more. How come a person in spiritual clothing, born and grown up in Vrindavan, has turned into an atheist?

There are also others who may not approve of the thought of atheism – but they are actually not disturbed by that! And really, why would they be? It is not really any of their matter whether the owner of the restaurant they have come to eat in believes in god or not!

Here I can see one thing: people online, when they act and write from the safe distance of their homes, from in front of the computer, can be rude and insulting. They can write bad things and use language they would never use in person. And that’s something people don’t do in person! Maybe we also have nicer people here in our restaurant than there are generally online – but it is definitely clear that I have had only positive feedback on the news that I am an atheist.

And this gives me hope: even if there are a lot of people who would never dream of leaving their belief in god, they are ready and intellectually advanced enough not to see a problem in the lack of god-awareness of others or the straight-out refusal that there might be a god at all!

Religion and Spirituality – What is the Difference? – 25 Oct 10