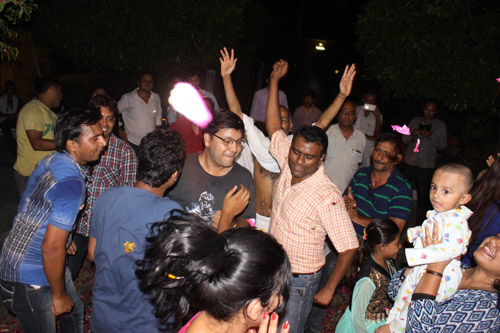 Admit to your Atheism to show that Atheists are not miserable or uncompassionate! – 28 Jul 15

I yesterday mentioned that I happily tell people about my atheist views. I would love to spread this and get more and more people to doubt religion and get away from it. Not every atheist feels like this however! No, there are people who hesitate very much admitting to their non-believing attitude. They even feel guilty about it! If you are one of these, I think you need to change this!

What you need to know to understand the full extent of this problem, is that in India the word atheist, ‘nastik’ in Hindi, somehow has a very negative annotation. A great majority of people is religious and most of them believe that only with the belief in god you can be kind, full of love and enjoy life! They honestly think that someone not believing in god could not be a good, moral person. He or she could not do good for others and not even have fun and laugh him- or herself! It is like the image of a bad person!

That’s why people hesitate to really say that they are non-believers, atheists. They call themselves progressive, logical, skeptical, rational or any other similar word that describes someone who doesn’t conform to traditional ways. None of these words however goes far enough. None of these words is clear enough, in my eyes, to express what you really mean: that you don’t follow religion and don’t believe in god!

In society, the word ‘atheist’ has a negative meaning and you don’t want to be seen in negative light. The way to change this is not however to change the word, the term. If you do this, you provide support to the negative view, agreeing that atheists cannot have fun. You agree that you are not an atheist because you want to be a positive person – and atheists are not. This is not the right way.

The danger doing this is that others, trying to be modern or different, use the same word you do, while they are actually still full-fledged believers! You say that they are not logical but in their minds they are! In the same way you can be misunderstood as such a believer who tries to show a more open and flexible mindset. If you say you are ‘progressive’, it can mean everything from doing your ceremonial worship with electric lights instead of candles to not believing in god!

Call a spade a spade. Only this can prevent confusion.

We have to break the bad annotation of the word ‘atheist’ but that we can only do, if we call ourselves atheists and show the world that we have just the same, no, even more fun! Be clear about who you are and what you think. It is natural and right for you, so you can also tell others about it. With time, the image will change. Be honest and clear – it will bring change!