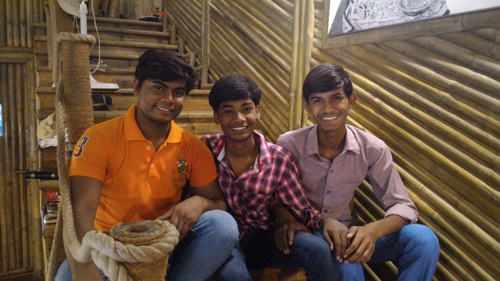 Experience of Life brought our Ashram Boys back – 2 Sep 16

Today I would like to write about a bunch of boys, three to be exact, who have been in our lives and hearts for a long time – and two of them have recently come back to our Ashram as well! Anybody who has been here in the past six or seven years knows whom I am talking about: Pawan, Mohit and Jaysingh!

I wrote to you about Jaysingh nearly two years ago. In that time, we were a bit shaken about his decision to leave the Ashram but accepted it as what it was: the wish of a 16-year-old to explore the world. Following his example, even if a bit less drastically, our second boy, Mohit, did the same about half a year later, announcing that he would now rather stay with his family in their village and go to school there.

Pawan remained with us and had his own adventures, changing schools here and finding his place again as the oldest of the ‘Ashram boys’. Life went on, we kept ourselves busy and opened Ammaji’s Ayurvedic Restaurant.

About three months into operations, my father told me of a phone call he had received: Jaysingh was asking whether he could come by to visit. Of course, we replied! It would be nice to see him after so long and catch up on what he had been doing! He arrived and we found out that he had really had a taste of the ‘real world’ out there in the meantime: he had travelled to his various brothers and cousins living across the country and had worked in a few places to earn his money: as a daily labourer carrying sand and bricks for example and also in a saree factory.

It was this experience that made him ask me one thing: ‘Could I come and work here?’ He had seen how things really are in factories in India! Long working hours and cruel working conditions. His employer and supervisors didn’t scare away from hitting their employees for their mistakes. The machines were dangerous – if you didn’t take care, you could get your fingers cut off. Older workers complained about breathing problems, bad coughing and the like, all caused by the chemicals used for dying the sarees. With the long working hours, Jaysingh was always tired – once he had fallen asleep while working at the machine, ruining 80 sarees by this! Of course his employer was angry and hit him. Another time, a fire erupted and he as well as his coworkers had to climb up to a window to jump out from there and save themselves!

Briefly said, he has made his experiences and decided that he would rather come here and ask whether we would take him back, offering him work. He had been sending money home and would like to keep that up, too! Of course, for one of our boys we definitely have a place and he can even learn something as well! As a helper in the kitchen he will soon have gained some knowledge and experience which can go a long way for his life!

News travel fast, even in India and that’s how soon after Jaysingh joined us here, we got another boy returning to his second home: Mohit, too, rejoined us here. Both boys now learn how to make pizza, pasta and more! And what is great, too, is that they agreed to do some private schooling by the side, too – to finish their high school!

It is great to have them back – and they are happy, too!

Politicians use Caste System for Increasing their Votes – 10 Sep 10

Beauty Shines from within – not through Make-up – 7 Dec 08