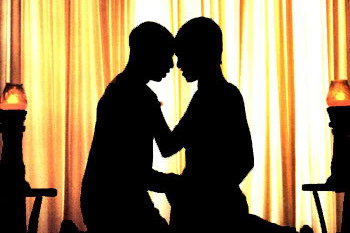 With Thomas and Iris we were talking about yesterday’s diary topic, the cheating of women and men on their spouses. While we were talking, we remembered about two other former employees of the Ashram and their story of cheating – while they were here, in the Ashram!

We had a new cook, a man who had been recommended to us and who had just started about three or four weeks before. Together in the kitchen were another cook and three assistant cooks. One of these assistants was a woman who had previously worked at the Ashram together with her husband. They had had to leave once because the husband had been too jealous, thinking every other member of the staff wanted to have sex with his wife. He even started a fight with our driver once! When more than a year later the woman asked whether she could work with us again, we agreed – but told her not to bring her husband along, as we didn’t want any fights!

What we didn’t see coming was that affair that developed in our kitchen! The staff started talking and gossiping about it with each other: the new cook and this woman! Well, we thought, everyone here is adult and what they want to do in their private time is their own matter – and who knows whether that is really true anyway? So we didn’t bother much about the rumours.

Until one day another staff member came running to Purnendu, clearly excited, asking him to come! He followed her, thinking something bad had happened, and she brought him to the staff washrooms. There was one door, locked from outside! She whispered to Purnendu that the two love birds were in there together!

It was a ridiculous situation! Purnendu decided to just open the lock. He did and they came out, fully dressed of course, as they had had enough time to realize that something was wrong! Upon Purnendu’s question what they had been doing, they answered ‘Oh, just talking!’

We later found out that our cook actually had a wife, something that he had not bothered to let us know about earlier. We looked at each other unbelievingly and had to laugh a good deal about it, too. Of course we had to ask them to leave, to maintain the Ashram atmosphere. The rest of the staff was happy as if they were in a live soap opera!

Then again however, we wondered: two married people have such a big craving for someone outside their marriage! It must be a sign that something is wrong with their marriage – and well, they were married to just someone. Isn’t it normal that they could be attracted to someone else instead?

In the end, you can only prove the cheating when you catch someone red-handed. Now this is the big question: is being locked in a bathroom together red-handed? Or just looking for a quiet place to talk?