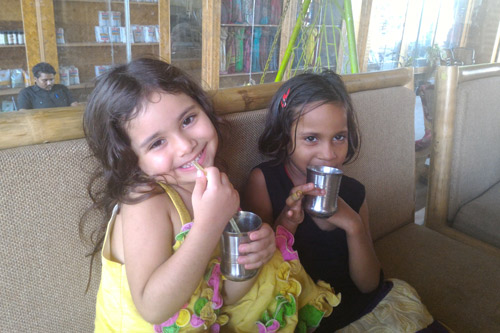 I nearly daily see the proof that Apra is my daughter – if naughtiness is passed on from parents to children! Yesterday again, she did something we had to tell her not to do again but which we will laugh about for a long time!

We had showered Apra in the afternoon, when it was about to get dark, as she had played outside, sweated and just needed to get fresh. When we went towards the restaurant, Apra wanted to play on our playground with the other kids. We have added more sand there, which was still lying in heaps at the side of the playground, so Ramona agreed with one condition: only make your feet dirty, we have just showered!

Unsurprisingly, and hour and a half later Apra arrived in the restaurant: happily smiling and from top to toe covered in sand! In her hair, on her arms until the shoulders and of course inside her clothes as well. Oh well, Ramona sighed, talked with her about the ‘only your feet’ rule of before and wanted to go towards the bathroom again when she noticed: Apra was not wearing her shoes.

“Where did you leave your shoes?” Ramona wanted to know. She got a wave with the hand in direction of the playground. Off they went towards the playground where Ramona expected to see the shoes neatly by the side of the swing. Or maybe not neatly but at least visible in the low light of sundown. She did not expect that she would see simply nothing, not a trace of Apra’s pink sandals! “Where are your shoes?” she asked our four-year-old again, who immediately went to work: she dove in directly with both arms into the next hill of sand and started digging!

“We put them somewhere in here!” Apra explained! Obviously she could not remember anymore where exactly she had buried the shoes!

Ramona gave up and told her we would search in the morning, in daylight – and of course told her that this was not the right place to keep her footwear… but she could not help laughing!

Neither could we and I was reminded of so many stories of mine when I was her age or a bit older. Yes, that’s how the life of a child should look like!