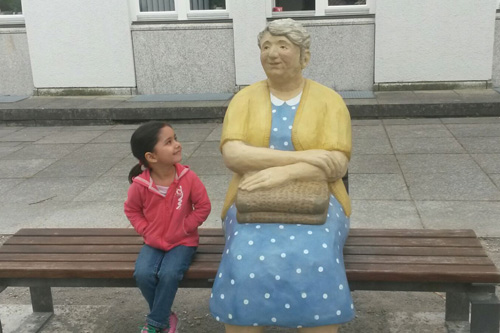 Today I would like to tell you about two names I have been hearing a lot lately from the mouth of my four-year-old daughter Apra: Elsa and Rosa. Oh, the parents among you paused while reading? Yes, I am talking about Elsa, the ice queen of the movie ‘Frozen’ and also her sister, just that she is called Rosa in our home. Let me tell you why.

For understanding this, you would have to know that Apra has not seen any Disney movies yet. In India, they are not as popular as in the west but more than that, the reason is that we don't watch TV and feel that she is still too small for those movies. There are elements which would make her unnecessarily afraid and which she would not understand at her age.

She has however heard and also seen some of the songs, as many of them are really nice, have a message and go into the ear easily. Apra likes seeing the women and girls, the ‘Disney princesses’ singing – and that’s how she, too, has seen Elsa. Ramona had heard that this character was quite popular but as neither Apra nor she knew the story, the two of them created their own story around Elsa and her sister.

In the movie, that sister is called Anna but Apra gave her the name Rosa. She created her own story around these two characters, first wanting to marry them – to which her mother said no, it was impossible to marry among sisters – and then giving them both one prince with the condition that they had to share him!

Of course, Apra picked up the magical elements of the video clip she saw and created lots of stories around how Else could do magic with her hands! For many days, we were playing that she could freeze things and she evolved how Elsa made it possible for Rosa to do magic too: by giving her a wand that she herself enchanted.

Finally, Eva brought Apra a book with the story of the Disney movie and Ramona had to read it out to her daily for quite a while. So now she knows the story – but that doesn’t keep her from making up elements on her own and disposing of parts of the story that she doesn’t like!

It keeps the fun alive – and I am sure we will still hear a lot of Elsa and Rosa!