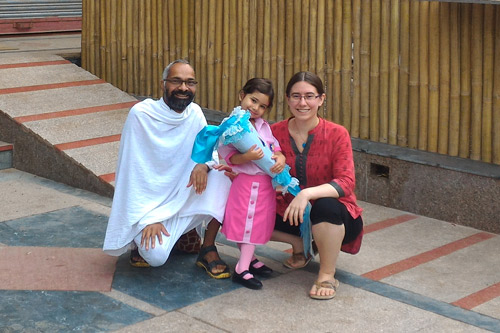 I just realized that during the time in which I wrote less blog entries, I missed telling you of a very important event which has brought again a big change to our lives: Apra has officially started going to school!

Maybe you remember how I told you last year that Apra had joined our school. With her three and a half years, she was still very small and we had no intention of really sending her that early. We are generally of the opinion that children need the time in that age to play and not sit in school for learning, as it is so often here. However Apra’s Ashram brothers all went to school in the morning and so she also very much wanted to go – and she enjoyed going to the classes where teachers were singing and playing with the kids!

So we let her go and encouraged her, too. Soon however we noticed that it was not as easy as we thought: Apra has her own mind and started wandering in between the classes, sometimes sitting here, sometimes there. The teachers enjoyed playing with the little one – but that was obviously not helping her learn and at the same time disturbed the other classes! And whenever she felt like, she would return back home, walk into our office and declare that she was done with school for the day!

We realized that our school, as much as we wanted her to learn here, would always present exactly this problem: she would not be one among others and home would always be too close! For a certain discipline which she would need to learn in life, she would need distance in between home and school! But what to do? We know that schools in the surrounding all use violence in their daily teaching – something which we would not be able to bear! Did we have any other option?

It was in the last summer holidays that a lady came as a guest to our restaurant who had been working in one school in Mathura that we had only heard about until that point. We had tried to find out where it was but found it difficult online. In our talk with her however, we asked very clearly whether corporal punishment was used there – and heard that it was strictly forbidden! It was music to our ears!

We immediately called and went the next day to visit the school – and were amazed! There, in Mathura, not very far away from our Ashram, we found a place that actually matched our philosophy, where children could learn in playful way, where violence was strictly banned and where there was no pressure on the little ones! Activity classes have more importance and there are lots of playgrounds, sport areas and fields for games on the huge grounds of the school. The teachers whom we met were lovely and the principal’s words explaining their philosophy so much matched our ideas, we immediately paid the advance for Apra’s admission fee!

And that’s how, on 4th July 2016, we walked into the school, Apra in between Ramona and me, in her new school uniform and incredibly proud! Apra and Ramona had made a ‘Schultüte’, which is a German tradition for the first school day, a large cornet with little presents for the child – and after a few hours at school, she was allowed to open it, finding sweets, stickers and a pencil case for the big school girl!

So now we are officially parents of a school girl – and of course I can already tell you some stories of how this has changed our and Apra’s life!

Do not Make Life Complicated for Yourself – 31 Jan 09