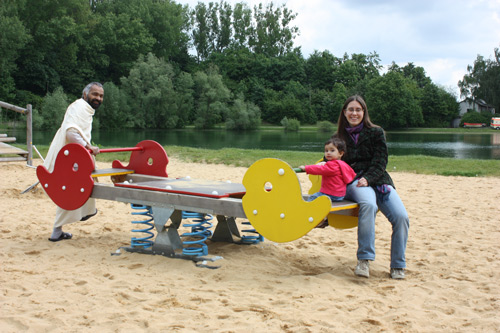 We have spent the past week in Augsburg, together with Apra’s German grandparents. On Saturday we had our first train journey with Apra and we were excited whether the three hours would pass as easily as the plane trip had passed. They did.

Apra actually fell asleep already in the car on the way to the train station. She slept right through the first hour of the journey and then finally opened her eyes in the moving train. She was amazed to see the landscape flying by in front of the window and pointed out, asking about everything she saw. According to her nature, she was in an adventurous mood and soon wanted to walk around. We let her stand on the floor and watched her changing face expressions – she had difficulties balancing herself on the shaking train floor and started laughing. In her excitement she started exploring the train and of course got in touch with our co-passengers.

The joy was big on all sides when we finally reached Augsburg and the home of her grandparents. She recognized them, of course, as she sees them nearly every week on skype and thus there was no reason to be shy with them. On the contrary, she walked into the flat and quickly discovered the box of toys and books which was waiting for her in the living room.

She had lots of time with these toys because we were not as lucky with the weather as we had wished. It was raining, windy and cold nearly throughout the complete week. Only on Tuesday and yesterday we had the possibility to get out a bit without freezing or getting wet. When we managed to go out however, it was a new adventure for Apra.

We went to a lake where there were lots of ducks and swans and when we unpacked the old bread pieces we had brought, they eagerly came closer, picking up and eating whatever we had thrown into the lake. Apra obviously had lots of fun and showed off her cricket-ball-throwing-skills, nearly hitting some of the ducks on the head with the bread pieces. After some time she decided that the ducks did not deserve all of the bread and chewed on some of it herself. It was in any way a memorable meeting with cute ducks and quite big swans.

Next to the lake was a big playground, too, which gave us the big joy of swinging with her, sliding with her and playing on the seesaw. Let’s see, if the weather gets better, we may even be able to go into the water of the lake next time.

Back in the area where she grew up, Ramona also had some highlights this week, meeting old friends and even giving an interview for the local newspaper who wanted to write an article about her. It is in today’s newspaper and if you know German, you can read it here.

Right now we are sitting in the train to Erkelenz, where we will stay with our long-time friend Sonja and her family. We will meet Yashendu there again and hope to get a bit better weather. Even if not, though, we already know that there will be lots of excitement within the house: Sonja and her family have cats! We told Apra about it and she is already excited about stroking them, playing with them and just being with them, the first cats she will really get close to!