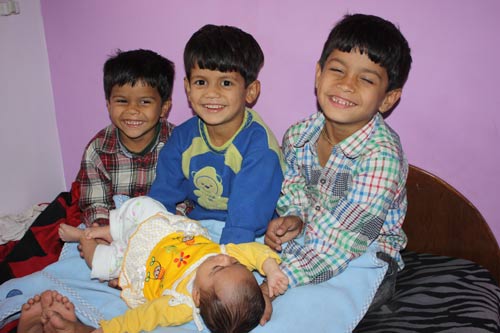 At the Ashram we have three brothers. Kanu is the oldest with his six years. Suraj is five years old and Chhotu is now four years old, although, if you ask him, he usually answers with ‘ten – five!’ Obviously, the pregnancy and birth of Apra was a big miracle for all three of them.

When we arrived at the airport in Delhi in September last year, Ramona was in the fifth month of her pregnancy and her belly had just started showing a little bit. Suraj, having come along to pick us up at the airport looked at her and after considering her figure for a while asked ‘Did you eat too much in the plane?’

We enlightened him about the real state of things only some weeks later. The first reaction – disbelief. There is a baby in there? A child? No. Cannot be. He saw however how I put my hand there to feel the little one and slowly he started believing it. We encouraged him to try it himself, to talk to her and put his hand on the belly or even his cheek – he would feel her reply. The result was that he looked at the belly critically, shouted ‘Hallo?’ and quickly pressed his ear against it. Not hearing anything though, he soon got tired of that game.

One day I asked him again ‘You know who is in there?’ And with confidence he replied ‘A baby!’ I said yes, there is my baby in there. We all burst into laughter at his reply: ‘No, if it was your baby, it would be in your belly!’ I started explaining that I had put the baby there but then decided that this might lead to too many further questions about the when and how.

Of course it did not take Suraj long to tell his brothers about Ramona’s growing belly. They, too, did not belief it at first and actually came in to confirm that their brother is not joking. With time however they all got used to the idea that there would be a baby girl here, soon.

When she finally was there and when we all came to the Ashram, they were very excited and again full of questions. Kanu looked at Ramona – obviously not fully back to her pre-pregnancy figure yet – poked her in the belly and asked ‘There are two more in there, right?’ ‘Ahem, no, why do you think this?’ ‘Because we are three, me, Suraj and Chhotu, so there should be two more!’

We managed to explain him that this was not necessarily the case in every family and he ran off to his brothers to play their new favourite game: ‘Apra, Apra’. Suraj played Ramona and lay down on the couch, Kanu came as the doctor, pretending to have a knife to cut open her belly and then Chhotu would jump out from behind the couch – he was playing Apra!

You see, Apra’s arrival brought lots of fun to us and them! 🙂