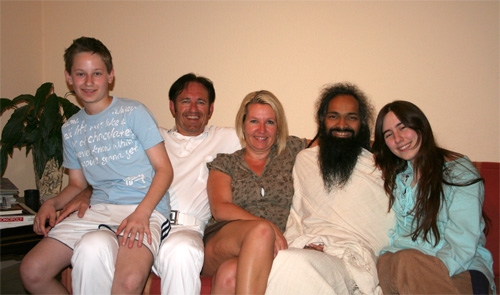 Today I had a lot of healings. One woman came and told that she was suffering very much and had many bad feelings. Her ex-husband had left her two years ago after a relationship of nearly 13 years for another woman. He told her on one day and two days later he moved out. Now she found out that soon he is going to marry the woman that he had left her for. She asked me what she could do to finally let him go. To my question she said that she was actually suffering the whole two years since he went. They had met once afterwards and she wanted to hear the reason why he left her and what had been her mistake. They both cried in that meeting but he did not tell her any reason.

She was very emotional when she told all this. I could see how much she had suffered but I also saw that she had not lived the anger and fury that naturally came after this separation. I told her how necessary it is to allow yourself to get angry. You have to accept your anger. It is a natural feeling if somebody does that to you! God also created this feeling. It is a negative feeling, yes, but you are not bad when you have this. It is there and you need to live it!

He could not face her when she asked him for the reason which means that he also felt guilty. She suffered for two years instead of letting the anger out. She asked me how she could accept that anger or how she could live it. And I explained her that she could let her anger flow.

Maybe I have described this technique already: when you go to toilet, take a pen, take toilet paper and write everything down that makes you angry. Write as though he is sitting in front of you and let all your anger out. When you have written down everything, use the paper for its original purpose and then flush it down the toilet. Just flush it all away.

She said that she would like to have a nice end to it, that he values their relationship. She also told that the marriage is on the same day that he had left her. I answered: After you have accepted and flushed away your anger you have to forgive him and then forget him. Don't even remember the date. What for? Why should you suffer any longer from this? If you do not get over this all you will suffer another 5 or 10 years. You already suffered 2 years from suppressed anger. So first of all you need to accept your anger and let it out, second you forgive him and third you forget him. There are so many other beautiful things in life. He is not anymore part of your life. Enjoy the world and God's creation and you will be again happy, laughing, loving.

I meet so many people daily and they share their problems with me. I am a healer and I give advice and counseling. And sometimes I share my experiences in this diary without revealing anybody's identity because I feel that many readers might be in a similar situation or have the same problem. This diary is read by so many people around the globe and I am sure that it helps some of the readers or that the readers can recommend to someone who is in one of the situations that I described.